IceTowers is a high-speed game of pyramid stacking, played without turns on any flat surface. Everyone plays at once, by "capping" other pieces with those of their own color. If yours is the top piece on a tower at the end of the game, you get points for the whole tower. As towers grow taller, you'll be able to "mine" pieces out and replay them, or even "split" some towers in two. The game ends when no more plays are possible.

Randomly scatter a set of Icehouse pieces across the tabletop, then stand them all upright where they lie. Assign a color to each player.

No Turns: IceTowers is unlike most games in that everyone plays all at once ­ there's no waiting for your turn. As soon as everyone is ready, you can start playing. You may carry out any of the three options for play at any time you choose.

No Two-Handed Play: Sometimes it will be necessary to use both hands (notably when mining), but as a rule, you can only use one hand while playing this game. In other words, you can only conduct one play option at a time.

No Minebacks: When you mine out a piece, you must immediately use it to cap a different tower. If there are no legal plays available, you must set the piece down in the open. (Etiquette note: it's acceptable to take a moment to examine your options, but you should then come to a decision and play the piece. You can't sit holding onto it, waiting for something better to come up; indeed, others may insist that you play the piece before they take their next actions.) 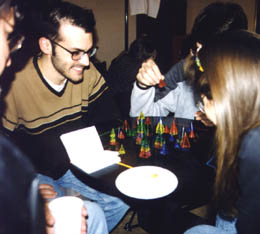 The game ends when all players agree that no more plays will be made. Often this will happen automatically, when no more moves are possible, but generally the players will need to agree that the game is over, since not all Splitting opportunities need be taken advantage of. Also, games may sometimes terminate due to a stalemate condition (see below).

When the game is over, collect up all the towers you control and put them in front of you. You get three points for each large piece you end up with, two points for each medium, and one point for each small piece. The player with the highest score wins.

During the endgame, a couple of forms of deadlock are possible (although unlikely). If a stalemate situation arises, the game is ended and the deadlocked pieces are dealt with as described below.

Final Piece Showdown: At the end of the game, you could wind up with an unplayed piece in your hand and nowhere attractive to put it. If there's someone else in the same situation, neither of you will want to set down your last piece, for fear of it being capped by the other player. In this case, the game ends and the players just set their pieces down. Pieces left free-standing in this way are scored as usual.

Tower Wars: Occasionally, an infinite loop situation may arise, in which several players can mine pieces and use them to take control of other towers, in a way that seems unending. Should this occur, the first thing to do is to keep playing for a while longer, since an ending may still be possible.

Think of it as a puzzle, and seek out the solution. For example, look for a chance to mine out a piece that will cause two pieces of one color to come together, thus allowing you to split the tower and break up the situation. If no resolution can be found to a Tower War, however, the game terminates and all towers involved in the war are removed, scoring no points.

IceTowers is best when played by three or four players, but it can also be played with two. Each person plays two colors. The game proceeds as if there were four people in the game, with each player carrying out actions for both of the colors they are assigned. At the end, you get points for towers controlled by both of your colors, the winner being the player with the highest combined score.

The two colors assigned to a player are still considered to be distinct, while the person who plays them is considered to be a single player. You may cap one of your colors with the other. You can mine one color out of a tower controlled by your other color. In order to split, two adjacent pieces must still be the same color, but only your opponent can split pairs in either of your colors.

Start Big: The most powerful pieces in the game are the 1-pointers, which can be used to capture anything, so save them until the end. Play the 3-pointers first.

Invest in the Future: Set up mining opportunities for yourself by getting a piece in on the lower levels of a tower. Later, if you cap that tower with a small piece, you'll have a lock on it, since you'll be able to mine the piece out again if someone else caps you.

Limit Your Opponents' Options: By the same token, if you cap towers indiscriminately, you'll just create mining opportunities for others. Look for towers in which the top piece is the only one of its color, and be especially careful not to cap a tower in a way that allows someone else to mine out more than one piece.

Look Before You Mine: The No Minebacks rule requires you to replay what you mine without too much delay, so figure out what you'll do with a mined piece before you get it into your hand.

Mine With Splitting in Mind: Splitting a tower can often stop your opponent cold, so watch for chances to remove a piece that will create a splitting situation. But don't split up a pair at the top of a tower... you'll just be giving another player a free piece.