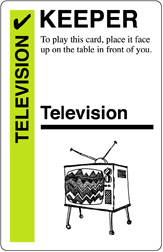 TV Shows I'd Like To See
By Andrew Looney

I have this idea for writing a novel set in the future, and including therein some descriptions of popular TV shows from that future era. The future setting of this imaginary book will be an America on the brink of legalizing marijuana, so many of the shows which the characters are watching and discussing will be controversial programs that end up redefining our culture's attitudes about pot.

It may be years before I have the time to do any serious writing again, so it will be a long time before I can do anything with these concepts. But I after recently describing these ideas to Luisa, I decided to go ahead and document them. Once written down, of course, I couldn't resist turning them into a webpage.

Most of my ideas are for situation comedies. Probably that means 30 minutes, but I have this thought that 20 or 15 minute TV shows will become popular in the future, so who knows.

Here's my list of TV shows from the Future:

Note to Anyone in ShowBiz: I'd love to actual pitch one or more of these shows to a network and be involved in actually creating it. If you know someone who knows someone, please let me know!

We've all heard it said that alcohol is a worse drug that marijuana. This reality show will put those claims to the test. Two teams will be flown to Amsterdam and locked in a house together. One team will consist of regular drinkers, the other of acknowledged pot-smokers. The teams will face off in various competitions, but before every challenge the players will need to imbibe increasingly large doses of their drugs of choice. The competitions will be designed to challenge both their addled brains and their disoriented senses, and of course, the losing team will have to eject one of their members. Eventually one team will be gone completely and the other team will continue with a series of individual challenges, until one player remains to collect the grand prize.

Set in Chicago in the late 1920s, this sitcom follows the antics of several drinking buddies trapped in a world where alcohol is illegal. I think one of the best ways to argue against the war on drugs is to compare it with Prohibition, yet the era is rapidly fading into the history books and is in danger of being forgotten. The only other show I can think of that has dealt with Prohibition (aside from random documentaries) was the Untouchables, in which the government agents were heroes chasing bad guy gangsters.

Speaking Easily will focus on a group of beer-drinking friends who must suddenly find a new way to booze up when their bar is closed down because of Prohibition, in 1919. In much the way M*A*S*H offered political commentary on the Vietnam War in the guise of stories about the Korean War, Speaking Easily will show how the drug war makes criminals of otherwise nice people and creates far more problems that it solves. Just as modern potheads are always looking for a new connection, the characters on this show will constantly be looking for a better source of moonshine, or the password to a good speak-easy. (Meanwhile, since marijuana wasn't criminalized until 1937, we can feature some early jazz-era vipers who introduce the main characters to reefer, which they find to be a delightful, legal alternative to beer.)

An American Stoner in Amsterdam

This sitcom would be like a pot-smoker's version of Cheers. Set in today's world, it features an American everyman who gets transferred to his company's office in Amsterdam. He quickly discovers the joys of their many coffeeshops and becomes part of a group of friends who have wacky adventures as they go from one coffeeshop to the next.

Filmed on location in Amsterdam, this show will feature real-life coffeeshops, generally a different one in each episode. The idea is to showcase the much-discussed but rarely seen interiors of the coffeeshops, making them seem not just like real places, but as the really cool hangout spots they actually are.

Ideally, the main character would be a major comedian who's also out about being a pot-smoker, who can become the Seinfeld-like focus of the show.

The original reality show is MTV's Real World series, which is filmed on location in various different cities, typically only here in the USA. I'd like to see them do a season in Amsterdam, again with the point being to give Americans a glimpse inside the real world of the Amsterdam Coffeeshops. But when last I heard, MTV was still bleeping and blurring all references to marijuana, so it can't happen until there's a shift in their corporate mentality and policies. 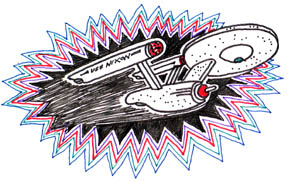 What the Star Trek franchise needs now that Enterprise is off the air is a show that will really shake things up and bring in new viewers. That's what this would do. Instead of the usual hour-long drama, this Trek will be a half-hour comedy. Instead of taking itself so seriously all the time, as Star Trek shows are prone to do, this series will be all about the poking fun at itself. Most of all, instead of mostly ignoring the look and style of the original series (with the exceptions being occasional tribute episodes), this show will be set in the same time-frame as the original series and will revel in its classic look & feel.

Instead of following the U.S.S. Enterprise, flagship of the fleet and pride of the Federation, this show will be about the U.S.S. Nixon, a ship whose crew is always making mistakes, where things are constantly going wrong, and which is therefore always getting sent away on the lamest missions. The Captain is a nearly incompetent goof-off who got where he is today through blackmail, and most of his crew are similarly lazy screw-ups, but when the going gets tough the Vulcan First Officer takes charge, and she has a way of getting the crew to pull it together and keep from crashing into the sun.

Wherever possible, the show will recycle footage from original series episodes, often following up on things that were left hanging when Captain Kirk and his crew left orbit to fly on to the next episode. What's happening one year later on that gangster planet? Or that Nazi planet? Or that planet with the mind-altering spores? What happens when another ship encounters the Klingon Cruiser that Scotty filled up with Tribbles? And think about that donut-shaped time portal from City on the Edge of Forever... is the Great Time Donut open for time tourism yet?

At some point, the Nixon can get sent forward in time and spend a season in the Next Generation's century, following Picard and his crew around, playing off their adventures. When they finally manage to go back in time again, they'll end up going back too far, winding up in the Enterprise time frame!

Obviously, actors from various series can reprise their roles as Special Guest Stars. Hopefully, there'd be at least one cameo in every episode.

One more thing: instead of 3-D Chess, this ship's Captain and First Officer will play Binary Homeworlds.

Not just a show but a 24 hour network of non-stop ever-changing groovy images. I have my own collection of cool image videos (what I call Neutral Television), many of which I've created myself by sampling and looping cool bits from shows and commercials... but of course, I have to program and keep it all going myself. I wish there was a channel I could turn to that would provide a video feed like this at all times, without ads or even any distracting words or icons, just soothing images, kaleidoscopes, screen-savers, dreamy colorscapes, and ever-changing abstract patterns.

On holidays, the Eye Candy Channel will feature special theme programming, much like the "yule log" show which already appears on some cable channel every Christmas morning. There'll be fireworks on July 4th, glowing jack-o-lanterns on Halloween, and a shift into the green spectrum on St. Patrick's Day.

To pay for itself, the Eye Candy Channel's audio track will be given over very heavily to commercials. The viewer will be encouraged to turn down the audio and provide their own musical soundtrack, but the ECC's audio track will have a style intended to be as non-annoying as possible. It will be required that all commercials on the ECC be delivered in a low, mellow voice, over ambient-style musical tracks.